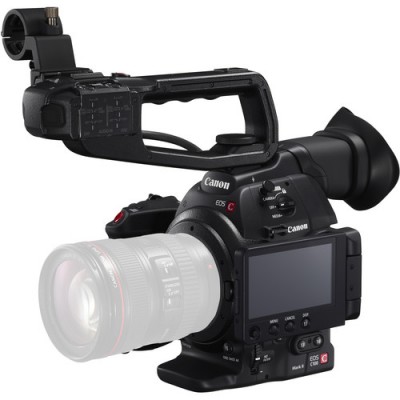 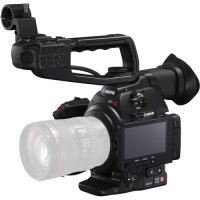 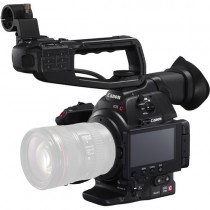 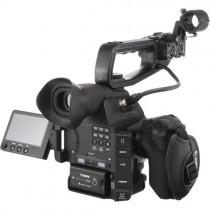 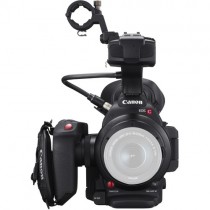 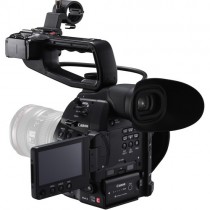 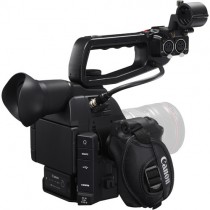 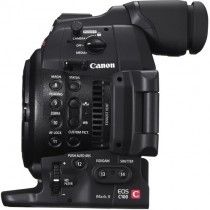 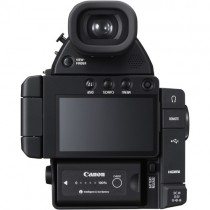 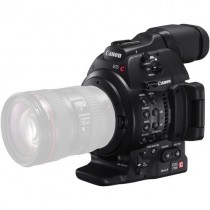 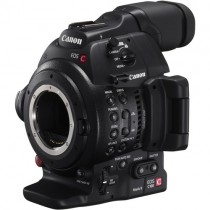 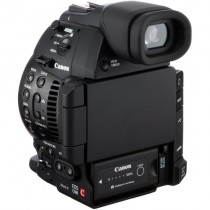 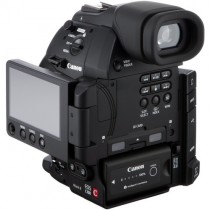 The Mark II also adds a variety of upgraded features including face detection AF, MP4 recording, additional frame rates when recording in AVCHD and slow & fast motion options when recording in MP4. The Mark II also has an additional microphone on the camera body for recording sound when the top handle is removed. It incorporates a 3.5" OLED display with increased resolution, and the EVF is now almost twice as large as on the original C100 and tilts as well. The Mark II supports GPS, and features built-in wireless functionality. The HDMI output supports timecode, as does the original C100, but it also supports Canon Log LUT.

The EOS C100 Mark II uses the same Super 35mm Canon CMOS sensor as its big brother, the C300, but uses a Digic DV 4 processor. With an EF lens mount, the camera is compatible with the full range of Canon EF, EF-S, and EF Cinema lenses. This is particularly useful for DSLR shooters who have already invested in Canon lenses. The camera uses the AVCHD codec to record 1080p video up to 24 Mbps. It supports dual SD/SDHC/SDXC memory cards which, thanks to the efficient AVCHD codec, allows you to record nearly three hours of HD video on a single 32GB card. For professional applications, you can also record clean, uncompressed 4:2:2 video with embedded timecode via the HDMI output.

Dual Pixel CMOS AF technology features a CMOS sensor that consists of an array of pixels that each feature two separate photodiodes. By continuously comparing their outputs during AF mode, phase-difference autofocus helps ensure non-blurred images and smooth focus transitions even when the talent and/or camera are moving. The new feature places a high priority on maintaining sharp focus while providing a natural, smooth autofocus movement with select Canon EF lenses - including newer-generation STM lenses - which offer even smoother and quieter operation.

With an extended ISO range from 320 to 102,400, the EOS C100 Mark II is even more sensitive to light than its predecessor. This lets you shoot usable footage during low-light and night shoots, even when using available or ambient lighting as your main light source. Being able to operate under lower light levels means you can work quickly with smaller crews and resources, ideal for low-budget and independent filmmakers.

Internal camera menus are now controllable from buttons on the camera body. While previously a removable joystick was the only way to control the internal menus, now buttons on the rear of the camera under the built-in monitor can be used. This lets you access the menus when the side grip is removed.

The Key Lock setting now makes it possible to lock all operations, including the record button. This helps to prevent accidental operation during a critical shoot by the operator inadvertently pressing a wrong button

The Super 35mm-sized sensor provides an angle-of-view and depth of field that equivalent to that of traditional Super 35mm film. With a native resolution of 8.3MP and a wider pixel pitch than conventional professional camcorders, the sensor offers enhanced sensitivity and reduced noise in low light environments.

Designed and built by Canon for the highest HD RGB processing, the DIGIC DV 4 Image Processor uses proprietary circuits and architecture to deliver the highest image quality at the highest speeds, with low power consumption and minimal heat output. It processes the RGB representations that originate in the single CMOS sensor of the camera into three channels (Red, Blue, and Green) to maintain the rich resolution and clean color fidelity formerly possible only in three-chip sensor designs.

Working together, the Super 35mm sensor and DIGIC DV 4 Image Processor achieve a high signal-to-noise ratio that enables recordings with great detail and dynamic range even in minimal light.

The camera is fully compatible with Canon's renowned EF mount lenses. Even specialty lenses, such as Canon's 24mm f/3.5L II tilt shift lens or the 8-15mm f/4L Ultra-Wide Zoom fisheye lens. When shooting with EF lenses, the camera features peripheral illumination correction, which automatically compensates for light fall-off in the corners of the image.

The camera supports AVCHD bit rates up to 24 Mbps (LPCM) at a maximum resolution of 1920x1080. Frame rates of 59.94p, 50p, 59.94i, 50i, 24p, 25p, PF30, and PF24 are all available to meet the needs of your production workflow. It supports relay recording of long takes between dual SD cards or can write video to both cards for redundancy in the event of SD card failure. Pre REC mode buffers approximately three seconds before the tally light activates.

Outputting an uncompressed signal via HDMI. This signal can superimpose timecode and the 2:3 pulldown marker, which means an external recorder and converter can process the HDMI output as an SDI signal. External recorders provide an instant back-up and help to streamline post-production workflows. The HDMI output also supports Canon Log LUT output.

Designed with the solo shooter in mind it is 85% the size of the Canon C300, and it is based on a mobile core design that allows additional accessories to be attached depending on the situation. Strip the camera down for a "run-and-gun" style, or complement the camera with the full range of camera-mounted accessories. With a compact body, you can even shoot dual-camera 3D without an over-sized and cumbersome rig. Its light weight reduces user fatigue and allows even elaborate rigging systems to remain mobile enough for a single operator. The removable accessory hand grip rotates 360 degrees for comfortable shooting positions, while customizable hardware buttons allow the camera to fit your own personal shooting preferences.

Accurately check focus, composition, and exposure with the 1.23 million dot-equivalent 0.45" electronic viewfinder with 100% coverage. The built-in 3.5" 1.23MP equivalent OLED panel tilts 100 degrees for flexibility when composing tough perspective shots and rotates 180 degrees to protect the screen when not in use. Use the LCD display to review footage or to view the camera's waveform monitor.

AVCHD or MP4 File Based Recording to SD Cards

The camera records video to SDHC/SDXC cards using AVCHD, a high-efficiency codec that has quickly become a standard in both the professional and consumer video markets. Maximum bit-rate is 24 Mbps. Video files greater than 2GB are split into multiple files while recording, which are automatically joined together upon import using Canon Data Import. AVCHD video is widely supported across NLE systems and is the standard codec for Blu-Ray.

The camera records using the MP4 codec, and can record in fast motion (25% faster) or slow motion (40% slower) in MP4 recording mode.

The camera offers complete manual control of each aspect of the recording process. Create and recall custom picture settings, camera functions, and display options. The camera also features several powerful and intuitive focusing aids in both the EVF and LCD monitor that make it easy to confirm critical focus distance; Peaking Modes and Magnify Focus Modes are available while in standby or while recording. Additionally, the LCD features Edge Monitor Display; green waveform display the overall focus of the scene and red waveform provide focus feedback of the three focus check boxes visible on the LCD monitor.

One-Shot AF executes focus adjustments with a dedicated button, and the Push Auto Iris button automatically adjusts the aperture of the lens to quickly and easily maintain proper exposure. Both of these functions can be accessed even when operating in manual mode.

In excessively bright environments neutral density filters are often required to avoid over exposure, without compromising desirable shutter and aperture settings. It features built-in ND filters in three densities, which make for four ND configurations (OFF, 2 stops, 4 stops, 6 stops). The built-in ND filters are deployed via a manual dial.

Remotely control the camera via its LANC-compatible remote terminal. Remote operation allows for single-person operation even in creative rigging situations. 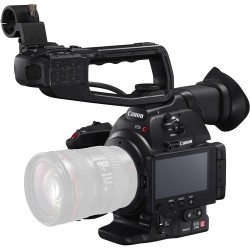 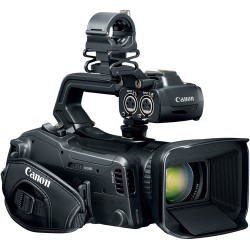 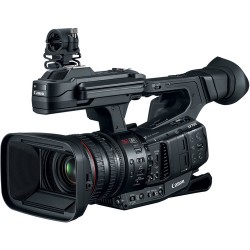